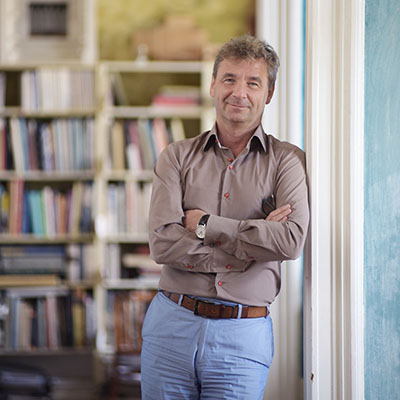 Gábor Zoboki’s professional career started in leading workshops of the country (KÖZTI Rt, BUVÁTI Rt) in the company of excellent masters of architecture. Since the foundation of his own practice, he is the lead architect of significant projects, the main designer and originator of ideas and the leader of the office.

His career, despite his young age, is characterized by large-scale, complex projects. The Town Hall Studio founded within BUVÁTI was the first workshop where he could independently reveal his capabilities. This is where the detailed urban plan for the historical Inner City, considered the heart of Budapest, was shaped showing new directions. This task involved the processing of a huge amount of data in the course of far-reaching coordination and liaising with the authorities.

Towards the end of the nineties, the Hungarian economy and society looked forward to considerable changes, so the state-owned company life form was also questioned. There was an opportunity for Gábor Zoboki to form Zoboki and Associates Architects, the legal predecessor of the present company, with several colleagues for completing the Town Hall Project as their first assignment. Later on, further projects came justifying the success of their work. After that, when Nóra Demeter joined the company, they continued their work under the name of Zoboki-Demeter and Associates Architects.

Gábor Zoboki’s most complex professional project until now was the planning of the Palace of Arts (Müpa) Budapest where he succeeded in creating an exemplary building complex from both architectural and technology aspects.

With this investment, Budapest entered the rank of the most modern and prominent concert venues in the world. With this architectural, technological and organizational experience, Zoboki-Demeter and Associate Architects gained such unique knowledge that they could benefit in further large-volume projects. So the office received a number of requests to design similar facilities (Surgut – Siberia, Pécs, Shenzhen – China, Liszt Ferenc Academy of Music, Budapest). The cooperation with MÜPA has been ever since continuous: Gábor Zoboki has been taking part in expanding its relationships since this house with unique capabilities maintains a wide range of connections both in Europe and overseas.
Gábor Zoboki is an active member of the Hungarian Chamber of Architects and the Association of Hungarian Architects; he participates in a number of Budapest and district plan juries either as participant or as juror. He has been the winning designer or a member of the design team of significant design competitions, and his accomplishments have been awarded with the most important prizes of the Hungarian and the international architect community. He publishes in professional papers, and receives recensions and reviews in these periodicals and daily papers.

His negotiating language is the English, but he also has German, Russian and French language skills.
He is fond of music.
As for his working method, Gábor Zoboki has a complex approach, that is, he puts across also the aspects of economy and art – apart from the architectural framework and technical conditions.

Awards of Gábor Zoboki and his office: